A Heriz typically incorporates a central medallion (representing a window to heaven) and utilizes rectilinear lines giving a more primitive feel to the design.  The stand-out colors are shades of red and blue with touches of ivory to accentuate the colors.

This piece provides the owner with an extensive palette from which to choose, including the in vogue colors of rich salmon and deep teal.

Must one start with the carpet?  Not necessarily.  Interior designer Darren Henault “largely ignores conventional approaches to mixing or matching rugs with fabrics delighting instead in the injection of a rug’s new colors into a room.”   This stunning Heriz would bring a powerful infusion of color to a space! The geometrical lines would transfer seamlessly to modern furniture and décor.

A Kebabian carpet is always beautiful in its own right, functional and washable, and timeless in design and quality. A Kebabian carpet brings to a space the human touch, a discernible vibe, a functionality and beauty that cannot be equaled in any other medium.

Nothing hails spring better than this very fine jubilant Mughal carpet.  This piece with a Gul Jadid design or “new flower” design hanging in WINDOW RIGHT measures 9 x 12.1.  It was hand-knotted in northern Afghanistan by Turkmen women using handspun vegetally dyed local wool and cotton.  The Mughal Empire gave South Asia one of its most enduring and recognizable styles, decorating of objects of all kinds with patterns of naturally depicted flowers.

In his book, Flowers Underfoot Indian Carpets of the Mughal Era, Daniel Walker explains,“ The key development in carpet design—and in all art—during the reign of Shah Jahan was the wide-spread appearance of a new style that featured naturalistic flowering plants shown in profile against a plain background.”  His contribution to art and beauty is celebrated in this masterpiece.

The crisp white flowers, naturally depicted, set against a field of blue and green (created from natural dyes exhibiting an exquisite abrash)  is breathtaking.  These flowers which are made of  cotton “pop” against the field and appear to be “dancing and singing”.  The beauty of this piece will hold its own against anything a winter might bring and will rally a space to joy despite what is going on outside or inside 😉 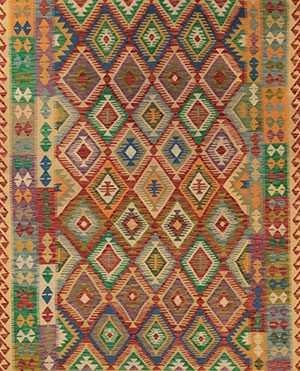 Sign up for product announcements before anyone else – plus special offers & new shipment notifications!